Thrill of Catching The Big One

If you haven’t had the thrill of landing a huge Mahi Mahi fish off the coast of Florida, then believe me when I say that you happen to be missing out on a wonderful fishing experience. The months of summer and spring bring forth plenty of Mahi Mahi, also commonly referred to as the Florida dolphin fish or Dorado, to the Florida Keys. It happens to be one of the many exotic fish that lives in the Keys. The color of the Dorado is a blaze of yellow and blue or a deep yellow and green when seen underwater. The male fish, with its square angled head, is known as the Bull dolphin while its female counterparts are largely known and referred to as ‘cows.’ Its dorsal fin usually extends from head to tail.

Article Sponsored by:  Electrician Fort Worth

This exotic fish is rarely found along the Gulf of Mexico. For you to find a school of these fish you would have to travel about 120 miles offshore to an area commonly known as the ‘steps.’ Your best bet, in the Florida Keys area, of finding this type of fish is heading down to the east coast around places like Marathon and Islamorada. These places have deep waters and plenty of artificial reef-like structure that is home to numerous wreck sites, some of which may have been sunk purposefully in the attempt to offer habitat to these exotic fish. The Dorado love this type of temperature and usually try to ambush their prey in these areas. It happens to be a perfect hunting ground for them. 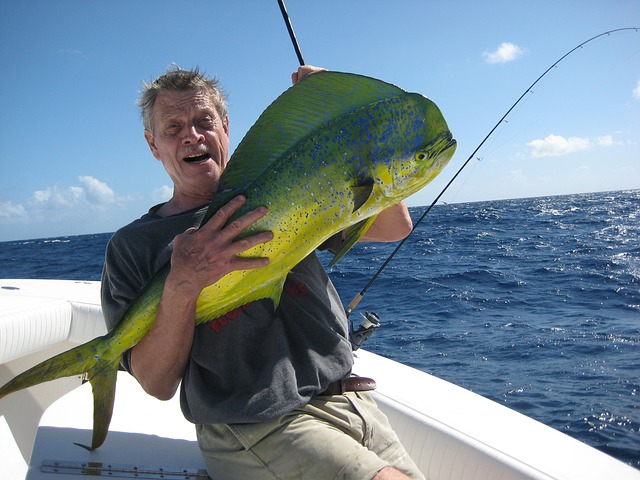 The size of their average schooling fish usually ranges from about 1-20 pounds. The bull fish will often be found roaming alone thus its loner status, however, sometimes you may find them roaming in pairs – male and female. The average male dolphin fish usually weighs about 55 pounds, although, on those rare occasions, you can be lucky enough to find one that exceeds 85 pounds. The large female Dorado often tops out at around 45 pounds. 88 pounds is currently the Florida world record.

At the Keys, these exotic fish are often caught through trolling lures and baits. Captains have the habit sometimes of following birds that are trailing these schools of fish. This happens to be quite an effective method when trying to locate a school of Dorado rather than just blind trolling. The best bait to use for this school of fish is dead bait. However, it will be to your advantage to keep a few live pilchards on hand for when the times the fish become extremely picky. Once you locate a school of these fish, you can keep them hanging on your fishing boat by keeping one fish floating in the water or usage of restrained chumming using cut-bait. The bigger and wiser fish will normally insist that you use live bait. Drifting and casting fishing methods are also great ways in fishing Mahi Mahi although, in reality, the most effective method for catching Dorado is by trolling.

Now you know when, how and where to catch Dolphin fish when in the Florida Keys. You now have absolutely no excuse not to experience the thrill of landing a huge Mahi Mahi fish in Florida.  When you go on your next fishing trip dont forget to take a few snacks for the day too.

Thank you for reading our article.  If you are located in the Fort Worth, Texas area we encourage you to visit our sponsor for all of your commercial electrician needs.